While older generations tend to think of millennials as lazy and entitled, many have made it an active goal to work hard and retire early.

Whether that’s been inspired by seeing their families struggle with retirement or hating the idea of coming into an office for the next 40 years, they’re determined to retire while they’re young enough to enjoy life, travel and spend time with their families.

But many of those same millennials are paying off thousands in debt and not earning more than the previous generation. Is early retirement even possible for millennials?

Related: What I Learned from My Retirement Planner 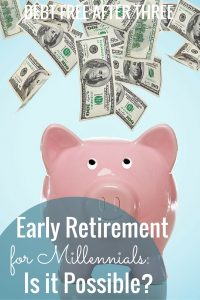 Make it a Priority

Because of the Great Recession, lower salaries and mounting student loans, today’s millennials are facing more financial constraints than their parents and grandparents did. That means those who do want to retire early have to make it their first priority, above all other financial and personal goals.

CFP Daniel Wrenne of Wrenne Financial Planning said that millennials who want to retire early will have to live on significantly less than they earn until they reach their goals. While their friends will be buying new cars, upgrading their homes and generally ignoring the future, they’ll be forced to carefully consider how to spend each dollar.

That also means millennials will have to learn to say no to grabbing take-out, attending destination weddings or picking up a round of drinks at the bar.

“All your friends will have nicer stuff than you – get mentally prepared to live with this,” he said.

Since you might be the only one in your social circle trying to achieve this goal, it’s important to find like-minded people who can answer your questions, share their stories and remind you of your goals.

Personal blogs including Mr. Money Mustache, Go Curry Cracker and 1500 Days can introduce you to a community of people striving for the same goal. No matter where you are on the early retirement journey, you’ll be able to see how other people are conquering the same path.

“The shared knowledge that’s available in the financial blogging community is so powerful,” said Andrew Meadows, VP of Brand + Culture at Ubiquity Retirement + Saving. “Take, for example, Go Curry Cracker. They, like so many other financial bloggers, wanted to share their personal financial success stories and now average savers can look to those clear cut examples.”

You have to be aware of how much you’re saving, how much you’ll need for retirement and how fast your investments are growing if you want to retire early.

CFP Jason Dahl of AFS 401(k) Retirement Services said that millennials who want to retire early need to create a budget that’s based on that goal. They should craft the remaining categories of their budget once they know what percentage of their income should be going to their retirement account. You can use a retirement calculator to figure out the magic number you need to hit and work backwards from there.

For example, if you’ve determined you need to put away $800 every month and take home $1,400 every paycheck, you can then budget the remaining $2,000. That will help you figure out what kind of apartment you can rent, if you can afford to buy a new car, etc.

You can set up automatic transfers to your retirement account from your direct deposit or your checking account to stay on track. This way, you won’t be tempted to take money out of your retirement line item to buy a new purse or go to Las Vegas with your buddies.

The road to early retirement is simple, but it isn’t easy. Elizabeth Colegrove, who owns eight rental properties with her husband, said they plan to retire in their early 40s. But doing so has meant saving a large portion of their income, having roommates and avoiding vacations.

“The question isn’t if it’s possible, it’s if they’re willing to do what it takes to retire early,” she said.

The Centennial Millennial: Retirement Planning for a Long Life