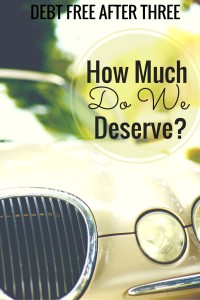 The other day, instead of going to bed at a normal hour, I stayed up to watch an old episode of “My Super Sweet 16.” The MTV show was once a staple in my life, so much so that apparently I threw a fit that I didn’t have my own all-out 16th birthday party.

This was an episode I hadn’t seen before and featured Reginae Carter, daughter of rapper Lil Wayne. Like most of the teens featured in the show, she wanted a huge party, a nice car and no drama. Two of out three, I guess.

It struck me while watching the show that she kept telling her strict mom that she deserved everything she wanted, including a Ferrari, a Celine purse and a grand entrance with white horses. When her mom suggested getting a BMW instead, she rebuffed it.

I could watch this show and think, “Man this girl doesn’t need a huge party. She should be fine with a nice restaurant dinner and a sleepover at her house.”

But the thing is, there’s nothing that separates what this girl thinks she deserves and what the rest of us think we deserve.

To deserve something means that you have qualities that are worthy of reward or punishment. But turning 16 doesn’t inherently mean you get to boss everyone around and demand a car. Even when I was 16, I had no right to expect my parents to drop their money on a huge party for me.

Deserve is a dangerous word. Who’s to say who deserves what? Does every 16-year-old with an A average deserve a Ferrari? Or a BMW? Does getting your license entitle you to special privileges? It’s the same thing with weddings. Do you deserve to have a day entirely about you? No. But it’s nice if people respect your decisions and if you choose to respect your guests.

The thing is, this isn’t a generational issue. I know people claim millennials are entitled, but if you watch shows like these closely, these kids are being enabled by parents who don’t want to say no.

When I was little, I used to try to convince my parents to let me do chores for money. My parents would tell me that I didn’t do chores for money, I did them because I was a part of the family and everyone had to contribute. Even though they would give me things I wanted, I always felt like it was their choice, that they did it because they wanted to give the gift.

I think we should strike the word deserve from our vocabularies. We don’t inherently deserve things. We want them and sometimes we get them. But feeling like we deserve them makes us lesss grateful for the things we do have and less upset when we don’t get something we want.

Money Lessons from the Movies
« What to Look For When You’re Apartment Hunting
My Biggest Money-Saving Trick? »