When I first started this blog, my main mission was to share how I was paying off my student loans early and to inspire other people to do the same. I did so at first by cutting expenses, living frugally and putting all my extra income toward my loans. 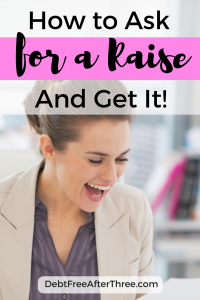 Now that I’m on the other side of debt freedom, I realize where I went wrong in my journey: I should’ve focused on earning more.

Yes, cutting expenses is great and necessary, but earning more money is better. Why? The 30 minutes you spend making your own laundry detergent could be spent brainstorming side hustles, updating your resume or selling your old clothes on Poshmark.

One of the best ways to make more money without getting a part-time job or driving for Uber is to negotiate your salary. So here are my tips on how to negotiate and get the raise you deserve.

Why You Should Negotiate and Ask for a Raise

When I graduated from college with a degree in journalism, I spent months applying for jobs. I sent out almost 200 job applications, including jobs in newspapers, magazines and PR firms. I applied every time I saw a position that I was remotely qualified for, even if they were asking for years of experience that I didn’t have.

A few weeks into my job hunt, a friend of mine told me about a job opening at her former workplace. She put in a good word for me with the editor and I had a phone interview within a couple days. They offered me the gig with a salary of $28,000 – more than what my friend made when she was working there. I was so ready to be done with the job hunt that I said yes immediately.

So what was my biggest mistake? Not negotiating the salary.

Fortunately, I’ve learned since then how to negotiate and ask for what I want. I haven’t always gotten a bigger salary, but I’m no longer scared of asking the question.

Here’s what I learned about negotiating – and why I think everyone should do it.

Negotiate Before You’ve Accepted the Job

When a company is looking for an employee, they’re usually anxious to find the right one. They need someone who can fit into the company culture, understand their role quickly and adapt to a new position. Usually, they’re also scrambling to find someone quickly because most people only give two weeks’ notice.

Even if you’ve been job hunting for weeks or months, you still have some power when you’re offered a position. If the company wants you, recognize that and ask for more money – before you’ve accepted the job.

Because the prospective employer doesn’t know if you’re going to accept the position, they have more reason to give you what you want. But this only works if you haven’t said yes yet – once you do that, there’s less incentive for them to agree.

Many women, myself included, suffer from Imposter Syndrome. We don’t think we’re as qualified, smart or capable as we truly are. While this can create some self-esteem issues in our personal lives, it can be financially devastating in a professional setting.

If you’re feeling unconfident when you ask for a raise, your boss will be able to sense it, even if it doesn’t seem overt. Anytime you go into a negotiation, you have to be feeling your absolute best. I don’t care if you have to crank up the music in your office before you’re ready, do whatever it takes to feel your most valuable. (I used to listen to “Defying Gravity” whenever I needed to be pumped up).

Try practicing your negotiating skills with someone close to you, like a friend or significant other. Ask them if you sound unsure, meek or timid. A third-party can tell you if you sound like a shy mouse versus a proud lion. Don’t be arrogant either – that’s not helpful.

If you want more help, check out this book on negotiating which can show you how to negotiate in any situation!

If you’re negotiating when you already have a job, you need to give your employer proof that you deserve a raise. How do you do that? By making a list of your accomplishments and how you’ve served the company well. For example, I used to be in charge of the marketing budget at my old job.

One day, I was going through the budget and found a few areas where I could cut expenses significantly. I went to my boss and asked him if I could get a bonus if I saved the company money. We agreed on a goal and in a few months, I earned my $1,000 bonus.

Another way to earn a raise or bonus is to provide other ways you’ve either made the company money or saved them money. Supervisors like to see tangible results – it’s not enough to say, “I’m a really good worker.” You have to provide proof.

It can be helpful to create a spreadsheet or list of your achievements so your boss has something to look over. Use numbers if possible – like I increased customer retention by 20%. The more specific you can be, the more likely it is you’ll get the results you want.

Ask for More Than What You Want

My friend Melanie taught me this trick when she was asking for a raise. If you really want $45,000, ask for $50,000. No one wants to automatically agree with your request – they’ll almost always try to give you a little less than what you’ve asked for. So ask for more than what you want so if they give you less, you’ll end up somewhere close to what you were hoping for.

Do It for Everyone Else

As a woman, I’m aware of the gender pay gay and how it affects the other women around me. So when I get nervous about negotiating, I try to think about the other women I know who deserve to be paid fairly.

If you’re having trouble asking for more money, imagine that you’re asking for someone else who really deserves it. Every time you ask for a raise, you’re telling your employer that you deserve to be compensated equally. Think about it as taking a stand for feminism and equality everywhere, not just in your own office.

Just so everyone understands me, I don’t think women themselves are responsible for fixing the pay gap, but negotiating is one way you can minimize its effects. Consider this: the guy next to you in the cubicle probably already negotiated his salary, so don’t let yourself fall behind.

What Happens If They Say No?

Most people I know hate the idea of negotiating because they’re scared of the possibility that someone will say no. It’s the same fear that keeps us from asking out that cute boy who works in the coffee shop or attending the hip hop dance class at your gym.

So it’s time to face that fear: yes, your boss might say no to your request. So what happens then? You have two options. You can either walk away from that job (or quit your current one) or keep working. A writing coach once told me if you keep working for a place after they deny you a raise, you basically signal to them that you were just bluffing.

However, I’ve negotiated and not gotten more and still kept working. Some companies truly can’t offer more than they’re currently paying you. Either way, it’s ok to stay and it’s ok to leave. It just depends on your current situation.

If you hear a no, don’t let it sour you on negotiating. Don’t let it reinforce the idea that you don’t deserve more. And please, above all, don’t take it personally. It’s usually no reflection of your abilities, but a symptom of the company’s bottom line. It’s always ok to try again later.

Have you ever negotiated or asked for a raise? How did it go?

What I’ve Learned From My Blog