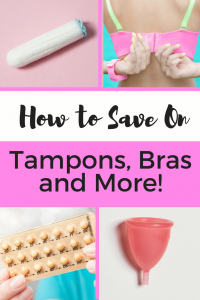 Most personal finance bloggers are willing to share how to save on groceries, utilities and gas. They’ll tell you how they use cloth diapers for their kids or buy used clothes from Goodwill.

But today, I’m here to talk about the stuff that we all have to buy, but that no one wants to save money on: bras and periods and dating. Being a woman is wonderful – but it’s also expensive AF. So here are some ways to minimize those costs while still getting what you want and need.

Most dating apps and websites are free, but some are only available on a paid membership or have premium upgrades. Is it worth it? Well, I stopped dating long before those websites were common, so I can’t say. I have friends who have tried both and ones who have been successful using both free and paid versions.

Basically, like love, dating services are a crapshoot. If you want to try a paid one, ask for a free trial or search for a coupon code or referral discount. As soon as you decide it’s not worth it, cancel it. Don’t sign up for a year at once, because you might not be able to get all your money back if you cancel later.

Date on the Cheap

If you’re dating around, going out to eat or grabbing drinks at the bar adds up quickly. So be original! Instead of dinner-and-a-movie, why not opt for a hike? Or a free day at a museum?

Look at it this way. If you’re going on two dates a week and paying $6 for each drink, that’s $50 a month (if you only get one drink.) But two drinks? That’s $100 a month. I’m not even including in food, parking or gas. Even the little things add upq quickly. 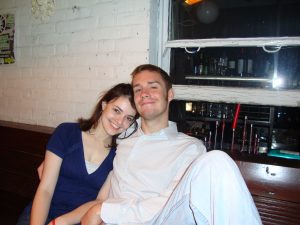 Me and Sam in London

When I started dating my now-husband, we were studying abroad in London. Yes, it was beautiful and romantic, but because we were students living in one of the most expensive cities in the world, we didn’t have money to go out to eat every time we wanted to hang out. We took a lot of walks exploring our new neighborhood and listened to music on our laptops. When we did go out, it was a special occasion.

If you are dating a lot, you have to protect yourself. And unfortunately, condoms adds up quickly. Relying on someone else to always have them isn’t a good idea and avoiding them isn’t an option either, unless you love the adrenaline rush of a pregnancy test.

Costco has great bulk prices for condoms, but if you don’t have a membership or don’t need that many, then Amazon has you covered. Plus, you get to avoid the awkward cashier interaction if you want to. Again, skip the drugstore. They often have the highest prices since you’re paying for convenience.

If you’ve ever been in the situation where you need the Plan B pill ASAP, you don’t have time to compare prices and shop around. That’s why I recommend doing that before you need it and having a pill already on hand.

I’ve found my hospital’s pharmacy and local drugstores to have better prices than national chains like Target, which usually charge a full $50, but Amazon carries it for only $30. Make sure to ask if there’s a generic option if you are buying in-person – you never know which will be cheaper.

I also bought one once from the pharmacy attached to my doctor’s office and it was even cheaper than Amazon. Remember, you can use your HSA card for this!

A few years ago, I became a huge Diva Cup convert. Back then, I spent more than $40 on one cup – which seemed like a fortune to me. But I was sick of buying expensive tampons every few months.

Now, the Diva Cup is only $25 on Amazon – basically the price of a few boxes of tampons. However, the Diva Cup lasts several years and is also way better for the environment than a traditional tampon. Plus, you can keep it in for up to 10-12 hours unlike a tampon – handy if you’re busy all day skiing or on vacation.

Using a menstrual cup can be a little awkward for the first time, but you get used to it pretty quickly. It’s not for everyone, but so many of my friends have loved getting one.

However, if you don’t like the idea of a menstrual cup, then I recommend buying your tampons on Amazon. When I compared prices for Tampax Pearl Regular (50-count), the prices were almost identical via Target or Amazon (free shipping if you’re a Prime member). But when I looked up the tampons on Walgreens.com, they were slightly more expensive (about $12 compared to $9). This isn’t a huge difference, but it’s one more reason to avoid shopping at a drugstore unless you absolutely have to.

A few years ago, I realized my bras weren’t fitting well, so I decided to get myself measured at Nordstrom. Everyone on the Reddit forum “A Bra That Fits” recommended going there, so I went, even though I knew I couldn’t afford anything in the store.

The Nordstrom saleslady told me that I was, in fact, wearing the wrong size. This made sense to me because the last time a Victoria’s Secret saleswoman measured me, she did it over the bra I was already wearing. WTF? 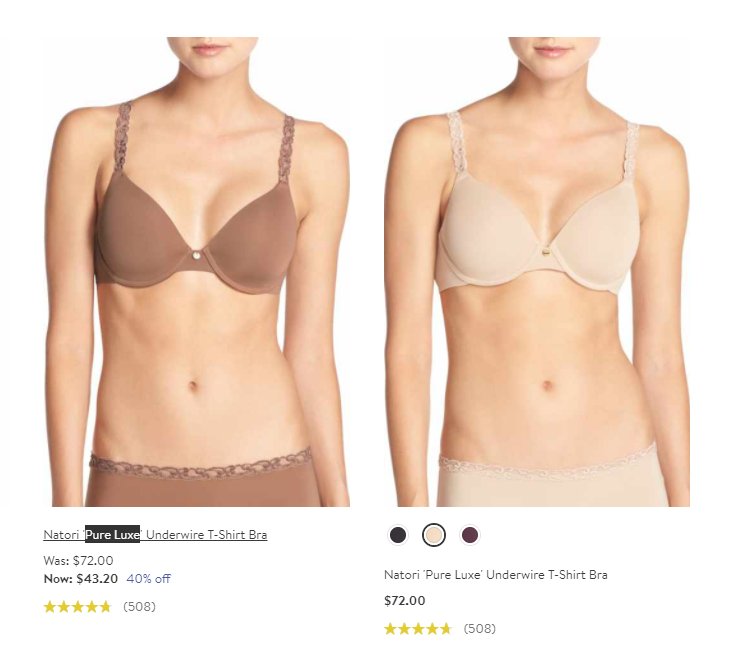 Fortunately, my Nordstrom fairy godmother was kind and understanding when I told her I couldn’t really afford to buy a bra then and there. She led me to the sale rack and showed me which bras were within my price range. I scooped up a couple of $25 ones and promised I’d return.

The saleswoman couldn’t find any bras that fit me well in the sale rack, so I ended up buying one at regular price. I still needed at least two more bras, so I went on eBay and Poshmark to find them.

If you haven’t bought bras on eBay, you’re really missing out. They have a huge selection for less than half of what you’d pay at the store. Plus, eBay always defends the buyer so if you get a bra that doesn’t fit the same as the one in store or has a tear, you can return it.

How do you save money on condoms, tampons, and bras? Share your secrets below!