How many of you have read “The Life-Changing Magic of Tidying Up?” Keep your hands raised. How many tried to go through your closet to prune anything that didn’t bring you joy, only to find yourself surrounded by clothes, boots and necklaces at 2 a.m.? Anyone? Just me?

I love uncluttering. I love getting rid of stuff and feeling like a weight’s been lifted off my shoulders. The problem is what I do with the stuff I get rid of.

Sometimes I can throw it away or donate it. But what about things that are good enough to sell? Of course, I want to make as much money as possible, but I hate spending hours taking photos only to make a $5 profit.

Here’s a round-up of my favorite ways to sell your stuff. 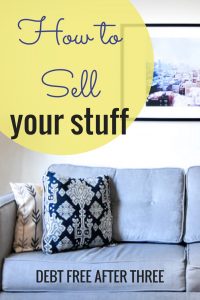 Decluttr is a new company that buys back stuff you don’t want, including cell phones, laptops, textbooks and more. Plus, they make it easy for you. You tell them what you want to sell, they send you a box and you pack it up. There’s a free shipping label included for you to mail it back.

What’s most interesting about Decluttr is that they take books, CDs, video games and DVDs. How many DVDs are your carting around from apartment to apartment because you can’t sell them and don’t want to throw them away? Unless you’ve tried to sell those online, you probably don’t know how hard it is. Making a profit off a book is almost impossible. And who buys used CDs anymore?

You can scan your stuff to Decluttr by using their app (which has a barcode reader) or their desktop version. I love how they make it easy for you to get rid of stuff, while also offering a fair deal on your items.

Plus, right now Decluttr is offering an extra 10% on whatever you sell with the code DECLUTTR10. That code expires on Monday, Feb. 20 so use it before then.

Here’s a sample of how much they pay per item:

I have a love and hate affair with eBay. One, it’s pretty easy to sell something if you price it low enough. But the buyer has all the power on eBay and I’ve had intense disputes that have resulted in me losing money on a deal. Competition is fierce on eBay so standing out sometimes means accepting less money than you’d like to.

If you’re selling in bulk, I think you can do better than if you only have individual items.

ThredUp is a used clothing site primarily for women. I love shopping on ThredUp. They have amazing designer brands, and I’ve gotten $30 jeans that retail for $150. If you want to sell on ThredUp, they send you a “clean-out kit” with a bag and shipping label.

Unfortunately, selling on ThredUp is tricky. They charge you $9.99 if you sell something, which is probably less than other fees, but it still seems excessive. Also, whatever they don’t accept gets donated to charity unless you want to pay for return shipping. I tried to sell on ThredUp a couple times before giving up.

Selling on Craigslist can be a double-edged sword. I love Craigslist for hard-to-ship items like desktop computers or musical instruments. When my husband upgraded some of his gear, it was fairly easy to sell old guitars and recording equipment on Craiglist.

Listing on Craigslist is super easy, but again, there are a few downsides. First, you have to meet with a real person in public. I’ve had a couple deals fall through because the person didn’t want to meet me at a safe location close to me. One woman asked if I could drive 45 minutes because she was scared of getting on the highway. Um no.

Also, scams are really popular on Craigslist. I’m used to most of them, but it’s still annoying to sift through your texts to see if anyone is a legit buyer. I don’t use Craigslist for low-value items, but I love it for furniture, kitchenware or anything else bulky.

While I love shopping at consignment stores, I hate selling at them. They usually want you to bring in clothes perfectly wrinkle-free and on hangers. Basically, they need to be ready to sell. Then, if they accept your items, you wait until they sell. Most stores only send you a check once a month so you could be waiting a while for your money.

Also, consignment stores are picky. I get it. They have more people trying to shove off their old clothes than they can handle. But even when I think my stuff is in good condition, they don’t want it. That’s why I’m including this at the bottom – they’re my last resort if I’m trying to get rid of clothes.

How have you tried to sell your stuff? Share your wins below!

How I tried to sell my clothes

How to sell on eBay

How to Get Rid of Your Stuff

Why I Spend More Money on Clothes
« Blue Apron Review: Worth Skipping?
5 Reasons Investing Isn’t as Scary as it Used to Be »