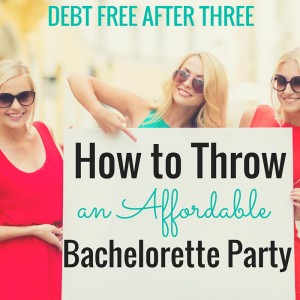 I’m all about spending as much money as you want on a wedding. If you’re paying for it in cash and don’t have lots of outstanding loans, then go ahead. Splurge on your big day.

But when it comes to having other people foot the bill, you should be as cost-conscious as possible. With a bachelorette party, the bride makes all the decisions on what to do, where to go and how much it’ll cost. But it’s the bridesmaids that pay for it.

Honestly, all you really need is a tiara, sash and assorted penis-shaped items (the blow-up version is my fav). It’s more about celebrating what your friend likes then spending a lot of money.

If you and your bridesmaids have enough money that dropping more than $1,000 on a party isn’t a big deal, go ahead. But when you plan a wedding, it isn’t always about “your day.” It’s also about other people and realizing that the choices you make will affect them too.

Since I am cost conscious, I wanted to make sure that my bachelorette parties would be affordable. Since half of my bridesmaids are from my hometown and half are college friends, I decided to have one party in my hometown for my high school friends and another party in the college town. 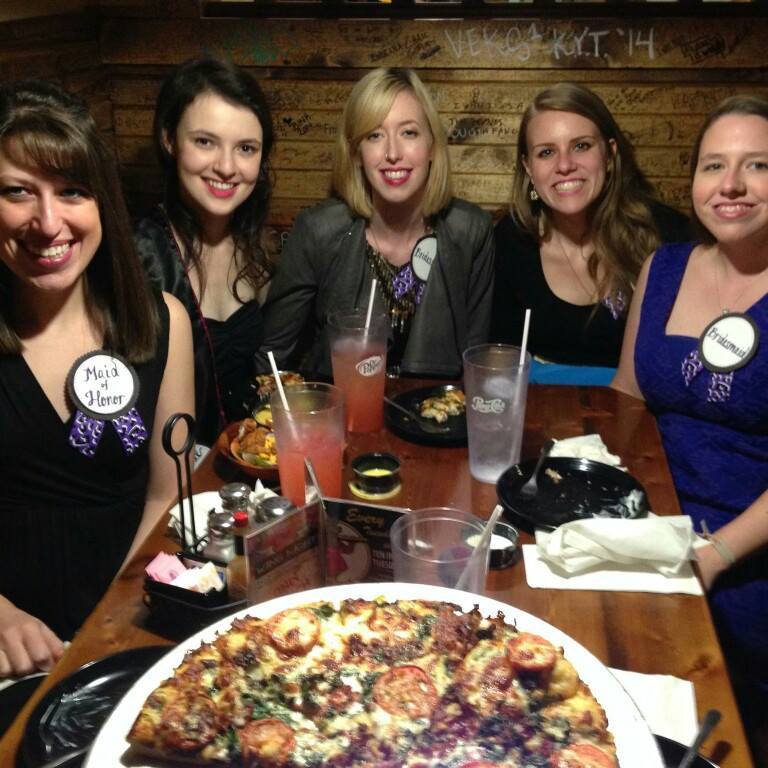 My college friends at my bachelorette bash

If you want to learn how to throw an affordable bachelorette party, here are some tips:

When I think back on my bachelorette parties, I remember dancing until 4 a.m. and drinking more shots in one night than I had in years. I’ll remember the feeling of having all my friends around me and thinking I was the luckiest girl in the world.

But I’ll also remember the silly decorations. Of course, my friends bought the typical penis straws, but they also got me some fun accessories I think every bride should have:

You can go completely DIY with the decorations. My friend Leah, who’s incredibly crafty, made name tags we could all wear (you can see them in the photo above).  If you’re not the artistic type or run out of time, you can find something simple on Etsy or Amazon. You can even send out cute, but CHEAP invitations through Paperless Post.

You don’t have to go all-out for decorations. If you want to save money, you can print out old photos of the bride and collage them with famous guys like Ryan Reynolds or Benedict Cumberbatch (my personal favorite).

2. Make your own entertainment

There are tons of fun bachelorette games that you can make yourself. My high school friends created a version of “The Newlywed Game” which was super easy and entirely free. Another group took some ideas from Pinterest and made homemade versions of games they saw online (this Pin the Junk on the Hunk game was my favorite).

At my friend Julie’s bachelorette party, we played “Never Have I Ever” and watched “Mean Girls” while playing a drinking game. Then, we watched some classic rom coms that we had all brought.

3. Split an Airbnb with friends

We stayed in a hotel for my second party and we each split a bed. Another friend slept on the fold-out couch. Each girl paid about $40 for the hotel (granted, I think we had six people in a five-person max room). If you plan to go out super late, it doesn’t really matter where you’re sleeping if you stumble home at 3 a.m.

You can also book a house or apartment on Airbnb, whether you want a mountain getaway or an urban bash. Plus, then you can cook and make your own drinks during the weekend which will save you even more money. Plus, right now when you use this link, you’ll get $40 off your first trip when you spend $75 or more.

The less you have to travel for a bachelorette party, the cheaper it’ll be. There’s no rule you have to go out of town to have a decent party. Again, ignore what you see on social media.

If you do decide to travel out of town, pick a location that’s central to all of you. Since my college friends still have families in Indiana, we decided to have the party a couple days after Christmas. That way, they’d all be home at the same time and wouldn’t have to fly home just for the event. Some people asked why we were having the party so far ahead of the wedding, but it made the most sense for my bridesmaids.

Again, ignore what anyone else says and do what’s easier for you and your friends.

Just like college, it never hurts to pre-game. If you’re going out, have snacks and drinks before you leave the hotel. Even a bottle of champagne is cheaper than a round of shots at a bar. I think my friends stocked up on alcohol at Costco for us to pre-game with. I can’t even imagine how much they would’ve spent ordering it directly from the hotel.

The hotel my bridesmaids booked had free breakfast, which saved us at least $15 the next day. Plus, we were super hungover the next day and none of us wanted to leave the hotel. As much as I love getting brunch with my besties, I was actually relieved to not have to go anywhere.

During a bachelorette party I planned for my friend, we ordered pizza one night and made dinner together the next day. It was like $30 a person for food for the whole weekend. Again, Costco for the win!

For the most part, most brides just want to have a good time with their friends. They want to reminisce, hang out and enjoy each other’s company. Almost everyone that came to my bachelorette parties is someone I don’t get to see very often. Us being together was more important than flying out to some expensive city or having a perfectly-decorated party.

If your bride wants an expensive bachelorette party that you can’t afford, talk to her and be honest. If your bride isn’t giving you lots of ideas of what she wants, think about what you guys used to do for fun. And when you run out of ideas, there’s always Pinterest.

How to Budget for Unexpected Expenses

How to Give When You’re in Debt

4 Ways to Save Money on Your Trip to Orlando
« How to do your taxes yourself
Do I need to justify my expenses? »