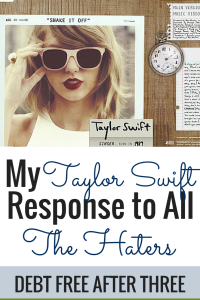 Last week Time Magazine picked up an article that was written about me onWise Bread, a personal finance site. The story explained how I was able to pay off $28,000 worth of student loans in three years while making around $30,000 a year.

For the most part, the responses were amazing. I started this blog to keep myself accountable, but I also wanted to show people that if you really wanted to pay off your debt quickly, it was possible.

As with everything on the internet, people quickly started to comment. And boy, did the trolls come out. At first I was upset that people were trying to discredit my story (which was all true), but then I realized some things were missing from the article that I wanted to clarify.

Here are the biggest misconceptions:

1. I don’t know where in the article it said I don’t pay rent, but ever since I got my first job out of college (in Oct. 2011), I’ve been paying rent by myself. For the first two years out of school, I lived alone. It’s only been in the last year that I started living with my fiancé and a friend. While I’ve been able to contribute the most toward my loans in the last year, I was also putting down $400 extra a month while I was still living solo.

2. I realize that not everyone is lucky enough to have a partner they want to live with, but there’s nothing stopping you from getting a roommate. I’ve had friends find people to live with on Craigslist and even I had the opportunity to live with a friend’s cousin, but turned it down because I wanted a solo apartment.

Rent is typically the biggest part of anyone’s budget so cutting that down will mean you have more left over to throw toward your debt. Plus, you can save so much on utilities, internet and even groceries if you get a roommate. If you save $300 a month after getting a roommate, that’s $3,600 you could put toward your loans or retirement account. That could be all you need for an emergency fund.

3. As much as I love my fiancé, he has never paid most of my living expenses. We’ve split everything 50/50 (including the dog that we share). As far as travel, what I do is put my third paycheck toward travel, so in a year I would have about the amount I need. If you get paid every two weeks like I do, you have two months where there’s an extra paycheck. Both times I’ve traveled internationally, I’ve used those “bonus” paychecks to pay for my trips.

4. I think this one offended me the most. What’s wrong with Indiana? We’re the home of the Indy 500, corn and basketball. How more American can you get?

5. Actually my degree was in journalism, but close! I knew when I was in school that journalism was not going to be a lucrative career so I made sure that my loans would never exceed $30,000. I have friends who made $25,000 in their first reporting jobs and some who make less than $40,000 after 20 years in the industry. I worked as a reporter for my first year out of school and currently do PR and marketing for a nonprofit.

6. I love my parents dearly. They taught me about personal finance, how to pay off debt and why it’s important to save. But since I graduated, they have not paid for rent, bills or groceries. But since I’m being totally transparent, here is what they do pay for:

7. I’m pretty sure that full-time drug dealers make more than I do. The closest I’ve come to selling drugs is watching “The Wire.”

8. Ha! First off, I don’t know any lawyer making that much. My fiancé and I make about the same amount, but he certainly did not help me with my loans.

9. I never said that paying off debt was easy. It’s simple, but it’s not easy. But I’ve posted my budget on here before, so you can see that it is doable. And yes, I live in a city that is affordable, but I also have made choices to make my life cheaper.

So if you live in Chicago or New York, you probably won’t be able to do what I did. But that doesn’t mean you can’t make a few changes to shave off a couple years off your loans or put that money toward your savings. Even though my life may seem atypical to people, the lessons I share can apply to most.

Have you accomplished a significant goal – and not had people believe you? Leave a note in the comments!

Money Lessons from the Movies
« How I save money on clothes and hobbies
I’m officially debt free! »