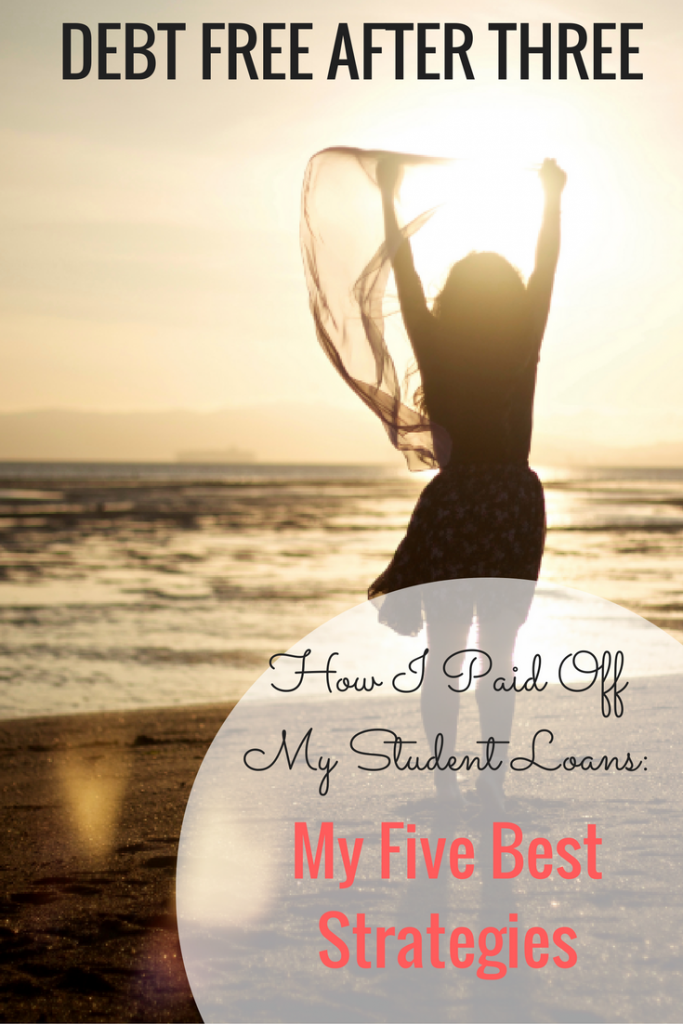 When I trying to pay off my student loans, I decided that I had to find a few different strategies to becoming debt free. I wasn’t earning much ($30,000/yr) and owed almost that much ($28,000/yr). Because of my limited salary, I needed to become more diligent about my finances than I had ever been.

I learned so much through that process and want to share the five best methods that you can use for your own debt payoff goals:

One of the best strategies I used to pay off my student loan was to track my spending. In college I spent with abandon, not counting how many dinners out or new tops I bought. I was aghast to see how much I spent and how quickly everything added up.

I used Mint to track my expenses and a homemade budget that I created in Excel. Seeing how much I was spending opened my eyes and made me change my habits. I have the shopping habits of a spendthrift and I only found that out because I was tracking everything.

Even though it sucked, I realized that if I really wanted to be debt free I had to cut anything that wasn’t a necessity. For example, I cut back buying craft beer which I LOVED (I’m from the Midwest, home of some of the best beer around). I also stopped buying makeup at Sephora and clothes from Pitaya. I learned how to thrift shop and buy makeup at drugstores.

Remember, this is your choice. But if you really, really want to be debt free, sometimes you have to give up things you love. I loved going to Sephora and the brewery, but I loved the idea of being debt free more. And it was worth it. As Dave Ramsey says, “Live like no one else so later you can live like no one else.”

The biggest change that helped me pay off my loans was moving in with my boyfriend and friend. I went from spending $625 a month to $266 a month (not including how much I saved on utilities, internet and Netflix). Let me be clear: I was saving more than $4,000 a year by getting two roommates.

Having two roommates let me put half of my take-home pay toward my loans and was the most noticeable difference in my budget. Rent is probably your biggest expenses and if you can save on that, it’s worth it.

Because I was only earning about $30,000 a year while I was paying off my student loans, I had to put all my extra money toward my loans. That included birthday and Christmas gifts, tax returns, freelance income – anything not part of my regular salary went toward my loans. Granted, sometimes I put half of it toward my loans and half toward some big goal I had.

We all get random windfalls and by automatically designating them toward your loans, you can make huge inroads without really changing your day-to-day lifestyle.

Once I committed to paying a certain amount extra toward my student loans per month, I made it automatic. I set up automatic payments toward my loans so it wasn’t even a question of if I would pay extra on top of the minimum payment. Doing it automatically took all the thought out of it and made it a habit for me.

I’d recommend the same: creating habits requires less willpower and making automatic payments can save you a lot of heartache.

How Much Interest Are You Paying?

How I Paid Off My Loans in Three Years – and You Can Too!
« Why I Didn’t Like Stitch Fix
How to Save on the Fun Things »