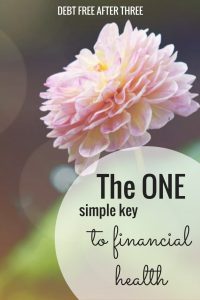 In 2014, I made my final payment on my student loans and reached the three-year finish line of being debt free. I’d been blogging about my journey for two years, and my story went viral. It got picked up by Time Magazine, was featured on Yahoo News and even led to a TV interview on Fox.

I loved sharing my message, because I was certain it would inspire people to do the same. But I never considered what would happen when millions of people would see my story.

I was checking the comments on the Time Facebook page when I noticed how many negative there were. A few people were positive, but most of them said things like, “I bet her boyfriend helped her” or “I’m sure her parents sent her money.” One person implied that I probably sold drugs to make my payments.

I couldn’t figure out why people were making these kinds of accusations. If they’d read my story, they’d know that my parents and boyfriend weren’t helping me financially and that I worked at a nonprofit, not the local street corner peddling meth (though I lived in Indiana at the time, so I can see why they’d think that).

A friend of mine told me that people attack what they refuse to acknowledge in themselves. I thought about that for a second. So all these people are mad because they can pay off their student loans early, but they don’t want to try?

I kept reading the comments. Many people said things like, “Well, I don’t want to live in a state like Indiana, even if it does have a low cost of living” or “I can’t find roommates, so I have to pay a lot for rent.”

I realized there was some truth in what they were saying, but mostly it was bullshit. A lot of times when people they can’t do something, they’re really saying, “I don’t want to.”

“I don’t want to give up something I have.”

But most of all, people don’t want to acknowledge that these are choices and not facts. Every day, we make choices that impact our finances, from the coffee we buy at Starbucks to the happy hour we attend after work. From the car that drives us to the office to the house we come home to at night. Whether you realize it or not, these choices affect the rest of the options you have.

It’s time to acknowledge that we have responsibility for the financial outcomes of our lives and be honest with yourselves. Maybe you can’t control what kind of salary your boss offers you, but you do control what industry you work in. Don’t say that you can’t afford to save for retirement because you’re a teacher making $37,000 a year.

Look at your expenses, see what you can change and commit to your goal. (Remember, I was making around $30,000 when I was paying off my student loans). There are so many stories of janitors and garbage collectors saving $1 million – there’s no reason you can’t do that too.

So it’s time to be honest. Instead of saying, “I can’t pay off my loans early because I can’t move,” say, “I like living in this apartment complex so I don’t want to get a cheaper place.” It’s ok to make those kinds of financial choices, as long as you’re honest about them.

In The Power of Habit: Why We Do What We Do in Life and Business

, Charles Duhigg show that when people acknowledge the control they have over their own decisions, they feel less resentful and more capable to stick to their habits. If you acknowledge your financial choices, you’ll feel less constrained by them. But this only happens when you’re honest with yourself.

Unfortunately, most of us feel so much shame, guilt and fear about money that it’s easier to pay the credit card bill and forget about it. We don’t want to admit that we love our monthly Stich Fix subscription too much to cancel it and put the money toward our student loans.

That’s my challenge to you right now: stop running away from your financial anxiety. Make a list of everything you want to know, like if your credit card balance is actually going down or if you can find a better rate for your student loans. Are you paying too much in taxes every paycheck or are you barely saving for retirement?

Being physically healthy isn’t just about having low blood pressure and cholesterol readings. It’s about knowing how you really live. Can you honestly tell the doctor how much you exercise and how often you eat too much sugar?

Facing our finances isn’t easy. Before I began my crusade of student loan payoff, I was a total spendthrift. I shopped for things I didn’t need – and often didn’t use. During a summer I spent interning in New York, I went out to eat three times a day.

But when I graduated college and entered the real world, I realized that I couldn’t live like that anymore. In fact, if I wanted to pay off my student loans early, I truly had to live in a way I never had before. It was scary giving up the mall, retail therapy and biweekly trips to Target. But coming head-to-head with my finances was the only way I was able to pay off my student loans early. I realized what my real priority was (becoming debt free) and what I was willing to give up to do it (everything besides travel).

Are you honest with yourself about your finances?

What Financial Health Means to Me

20 Questions to Determine Your Financial Health
« How You Can Balance Saving with Paying Off Debt
How We Made $9,000 on Airbnb »