If you’ve read my blog before or any personal finance blog within the last…ever, you probably have seen these headlines. They say things like, “Most Americans don’t save enough for retirement” or that “The Average Baby Boomer Only Has $25,000 Saved for Retirement.”

Why do these headlines matter so much to me? Because I know what it’s like to not have any money saved for retirement. I recently wrote a story for Guidevine about what retirement looks like when you haven’t saved and are just living off social security. 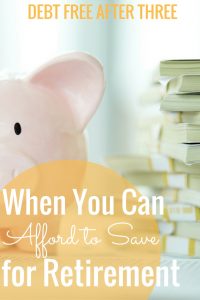 Want to know what retirement looks like if you haven’t saved? This isn’t what you’ve seen from your grandparents, who likely had pensions on top of decent social security checks. You can read my article from Guidevine about how many seniors live in poverty and how too many rely on social security for 90% of their retirement income.

If You Have a One-Bedroom Instead of a Studio

I made this mistake too many times in my life. When I moved to Indianapolis in 2012, I scoured for apartments, eventually finding a studio for $475 a month and a one-bedroom for $625. The studio was breezy, clean and had a landlord who really cared about the property. The only thing it was missing? A dishwasher.

In fact, the idea of not having a dishwasher bugged me so much that I ended up going with the $625 apartment. I convinced myself that if I didn’t have a dishwasher, I’d eat out more and not want to cook as much.

If You Eat Out Several Times a Week

This one probably sounds petty. “Come on Zina, so what if I get McDonald’s a few times a month? How does a few quarter pounders hurt my retirement?”

Here’s how. The average American eats out four times a week. A typical fast food meal costs about $8 – but that doesn’t include if you ate out at a nicer restaurant or also grabbed a beer with your meal.

If You Bought a New Car

This might be the dumbest mistake on the money. That’s because choosing not to eat out requires tons of micro-decisions throughout the week, but buying a new car is a big deal and something that you should avoid.

Again, let’s do the math. If you buy this year’s most popular car (a 2016 Honda Civic) and take out a loan for the full amount, you’ll owe $395 a month at today’s interest rates.

But if you invest that money over 40 years, you’ll have almost $1 million saved for retirement!

Or Do What You Want

I’m not saying don’t buy a car or ever eat out or rent a one-bedroom apartment. You can do whatever you want. But you should know what you’re giving up every time you make a financial decision. Unless you’re ok with living in Section 8 housing in retirement and not being able to visit your family, you should start saving for retirement now.

How to Own Your Future

Early Retirement for Millennials: Is it Possible?
« How to Give When You’re in Debt
Why I Didn’t Like Stitch Fix »